Gender Inequality and Being One in Christ 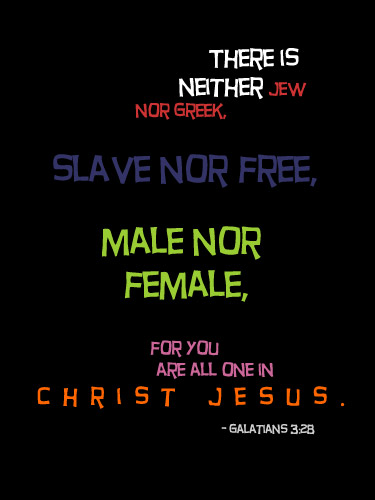 The temperature in the room ‘turned cold.’

All eyes were on me as he quoted 1 Timothy, chapter 2. I was the only woman in the room. I was the only woman minister in a room full of male pastors. “Not with braided hair…But I suffer not a woman to teach, nor to usurp authority over the man,” he shouted at the top of his lungs. Not missing a beat, others chimed in, agreeing, quickly turning these moments of listening to God’s Words from peaceful to chaos. The loudest of the group had a real winner of a remark, “This is the number one problem in the pulpits in America today!”

Oh boy! Did he really just say that?! Wow!

All I could say in response was, “No! It’s not a problem!”

I wanted to cry. I wanted to hide under my seat and pull my jacket over my head. I wanted to throw up, scream, yell at the top of my lungs, argue and debate the verse I hold so closely to my heart, “…nor is there male or female, for you are all one in Christ Jesus,” Galatians 3:28. But…what I ended up doing was becoming as quiet as a mouse. I felt as if the wind had just been knocked out of me, and I was suddenly and completely speechless. Most likely it was shock, or an angel shut my mouth like the lions’ mouths in the account of Daniel in the lions’ den. You decide which one.

We were all together, attending a House Church training intensive for two days. This was day one.

Although peace resumed for everyone else in the room, and I’d rather not admit it, I was still fuming inside. This was not the first time I found myself in a position defending my occupation, a female ordained minister. It was, however, the first time I was singled out like that; targeted with such hostility.

Sexism exists in the world. The gender pay gap is real. The Harvey Weinsteins in the world are influential (just look at the #MeToo social media campaign).

It is unbelievable to me, though, that in 2018, headship, patriarchy, and complementarianism are all still very much alive In the church. I cannot get my head around it!

Even in our movement, as of January 2017, married ordained women (yes, women are ordained) finally receive a pay check! We need to take a serious look at gender inequality. Another example is the uniform. Women are required to wear skirts, nylons, and heels, while men wear slacks and flat shoes. Come on! It’s 2018. Who wears stockings anymore? If I’ve been ordained and have been given authority, and am expected to preach in the pulpit, I should be able to not have to wear skirts, stockings, and heels but to at least have the choice to wear slacks and comfortable shoes if I desire.

This is a piece on Social Justice. Women held to a different standard than men, only because of gender, is unjust! As followers of Jesus, we can do better. We can be advocates in closing the gender gap in our society and in our denomination.

Braid or not, we are all “one in Christ Jesus.” Let us commit together to encourage our brothers and sisters to know who they are in Christ, and not even a room of Southern Baptist and Complementarian men will be able to change that.

Stacy Birks is a Major in The Salvation Army.  Presently stationed at The College for Officer Training in the Western USA Territory and serving as the Director of Campus Services, as well as the representative for Social Justice on campus.  She loves coffee, the outdoors, reading, and creating. A mother of three young adults and wife to the gorgeous, funny and talented Robert Birks.